Doctors: Lonely and Burned Out in COVID-19. How Are They Coping? 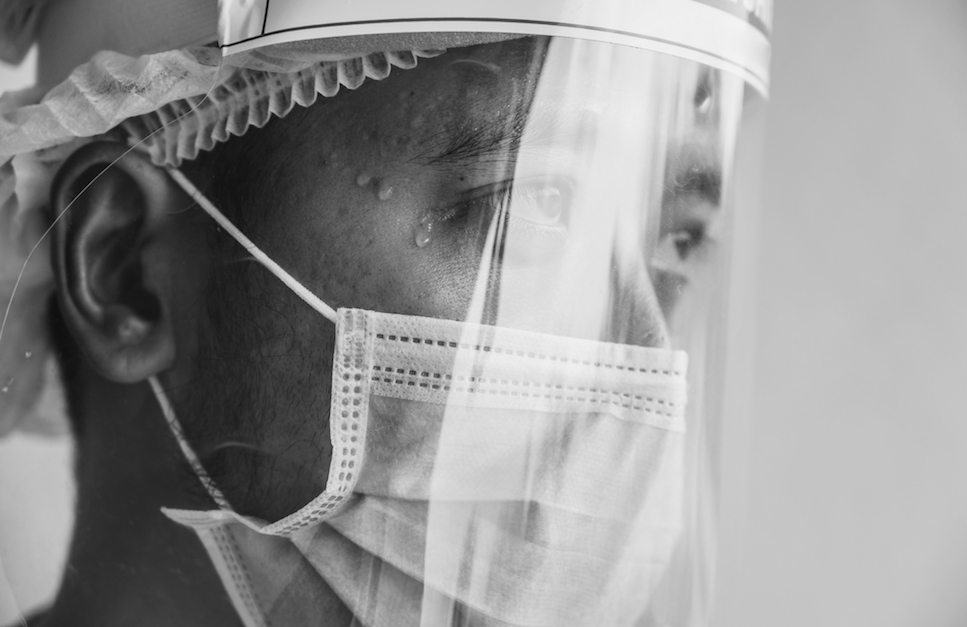 A recent Medscape survey found there were high levels of loneliness, stress, and burnout in physicians during the COVID-19 pandemic. Isolation and relationship stress add to the problem.

Patrick Ross, MD, a critical care physician at Children's Hospital of Los Angeles, was plagued with increasing worry about his health and that of his family, patients, and colleagues. While distancing from his wife and daughter, he became terrified of falling ill and dying alone.

As he grew more anxious, Ross withdrew from family, colleagues, and friends, although his clinical and academic responsibilities were unaffected. He barely ate; his weight plummeted, and he began to have suicidal thoughts.

Rebecca Margolis, DO, a pediatric anesthesiologist whom Ross was mentoring, noticed something was amiss and suggested that he go to a therapist. That suggestion may have saved him.

"Once I started therapy, I no longer had suicidal ideations, but I still remained anxious on a day-to-day basis," said Ross, who is an associate professor of clinical anesthesiology and pediatrics at the Keck School of Medicine of the University of Southern California, in Los Angeles. "As soon as I learned to manage or mitigate the anxiety, I was no longer consumed to the degree I had been by the sense of day-to-day threat."

Ross openly shares his story because "many other physicians may be going through versions of what I experienced, and I want to encourage them to get help if they're feeling stressed, anxious, lonely, depressed, or burned out, and to recognize that they are not alone."

Physicians Feel a Sense of Betrayal

Ross' experience, although extreme, is not unique. According to a Medscape survey of almost 7500 physicians, about two thirds (64%) of US physicians reported experiencing more intense burnout, and close to half (46%) reported feeling more lonely and isolated during the pandemic.

"We know that stress, which was already significant in physicians, has increased dramatically for many physicians during the pandemic. That's understandable, given the circumstances they've been working under," said Christine A. Sinsky, MD, vice president of professional satisfaction at the American Medical Association.

Lack of PPE has been identified as one of the most significant contributors to burnout and stress among physicians and other healthcare professionals. In all eight countries surveyed by Medscape, a significant number of respondents reported lacking appropriate PPE "sometimes," "often," or "always" when treating COVID-19 patients. Only 54% of US respondents said they were always adequately protected.

The PPE shortage not only jeopardizes physical health but also has a negative effect on mental health and morale. A US-based rheumatologist said, "The fact that we were sent to take care of infectious patients without proper PPE makes me feel we were betrayed in this fight."

Not What They Signed Up For

Many physicians expressed fear regarding their personal safety, but that was often superseded by concern for family — especially elderly relatives or young children. (Medscape's survey found that 9% of US respondents had immediate family members who had been diagnosed with COVID-19).

Larissa Thomas, MD, MPH, University of California, San Francisco (UCSF), said her greatest fear was bringing the virus home to her new baby and other vulnerable family members. Thomas is associate clinical professor of medicine and is a faculty hospitalist at Zuckerberg San Francisco General Hospital.

"Although physicians assume risk in our work, we didn't sign up to care for patients without adequate protection, and our families certainly didn't sign up for that risk, so the concern was acutely stressful," said Thomas, who is also associate program director for the UCSF Internal Medicine Residency Program and is director of well-being for UCSF Graduate Medical Education.

David Marcus, MD, residency director of the Combined Program in Emergency/Internal/Critical Care Medicine and chair of the GME Physician Wellbeing Committee at Northwell Health, Long Island, New York, said that a large stressor during the pandemic was having an elderly father with multiple comorbidities who lived alone and was unable to go out because of stay-at-home restrictions.

"I was worried not only for his physical health but also that his cognition might slip due to lack of socialization," said Marcus.

Marcus was also worried about his preschool-age daughter, who seemed to be regressing and becoming desocialized from no longer being at school. "Fortunately, school has reopened, but it was a constant weight on my wife and me to see the impact of the lockdown on her development," he said.

Being redeployed to new clinical roles in settings such as the emergency department or intensive care, which were not in their area of specialty, created much stress for physicians, Thomas said.

Physicians in private practice also had to adjust to new ways of practicing. In Medscape's survey, 39% of US physicians reported that their medical practice never closed during the pandemic. Keeping a practice open often meant learning to see patients virtually or becoming extremely vigilant about reducing the risk for contagion when seeing patients in person.

Social distancing during the pandemic had a negative effect on personal relationships for 44% of respondents, both in the United States and abroad.

One physician described her relationship with her partner as "more stressful" and argumentative. A rheumatologist reported experiencing frustration at having college-aged children living at home. Another respondent said that being with young children 24/7 left her "short-tempered," and an emergency medicine physician respondent said she and her family were "driving each other crazy."

Social distancing was not the only challenge to relationships. An orthopedist identified long, taxing work hours as contributing to a "decline in spousal harmony."

On the other hand, some physicians said their relationships improved by developing shared insight. An emergency medicine physician wrote that he and his wife were "having more quarrels" but were "trying very hard and succeeding at understanding that much of this is due to the changes in our living situation."

Raby's wife, a surgical nurse, had been redeployed to care for COVID-19 patients in the ICU — a situation she found grueling as well. Adding to the stress were the "rigorous distancing and sanitation precautions we needed to practice at home." Fear of contagion, together with exhaustion, resulted in "occasional moments of friction," Raby acknowledged.

Still, some physicians managed to find a bit of a silver lining. "We tried to relax, get as much sleep as possible, and keep things simple, not taking on extra tasks that could be postponed," Raby said. "It helped that we both recognized how difficult it was to reassure each other when we were stressed and scared, so we faced the crisis together, and I think it ultimately brought us closer."

Thomas said that the pandemic has helped her to recognize what she can and cannot control and how to take things one day at a time.

"When my husband and I can both work from home, we are grateful to have that ability and grateful for the things that we do have. These small moments of gratitude have sustained us day to day," Thomas said.

Socializing Outside the Box

Several physicians expressed a sense of loneliness because stay-at-home guidelines and social distancing prevented them from socializing with friends. In all countries, physician respondents to the Medscape survey reported feeling "more lonely" than prior to the pandemic. Over half (51%) of Portuguese physicians reported feeling lonelier; 48% of physicians in Brazil felt that way. The United States came in third, at 46%.

Many physicians feel cut off, even from other physicians, and are reluctant to share feelings of distress.

"Talking to colleagues about distress is an important human connection," Margolis emphasized. "We need to rely on each other to commiserate and receive validation and comfort."

Some institutions have formalized this process by instituting a "battle buddy" model — a term borrowed from the military — which involves pairing clinicians of similar specialty, career stage, and life circumstances to provide mutual peer support, Margolis said. A partner who notices concerning signs in the other partner can refer the person to resources for help.

Sinsky said that an organization called PeerRxMed offers physicians a chance to sign up for a "buddy," even outside their own institution.

The Importance of "Fixing" the Workplace

At times of crisis, organizations need to offer "stress first aid," Sinsky said. This includes providing for basic needs, such as child care, transportation, and healthy food, and having "open, transparent, and honest communication" from leadership regarding what is known and not known about the pandemic, clinician responsibilities, and stress reduction measures.

Marcus notes that at his institution, psychiatric residents and other members of the psychiatry department have "stepped up and crafted process groups and peer support contexts to debrief, engage, explore productive outlets for feelings, and facilitate communication." In particular, residents have found cognitive-behavioral therapy to be useful.

Despite the difficult situation, seeking help can be challenging for some physicians. One reason, Marcus says, is that doctors tend to think of themselves as being at the giving rather than the receiving end of help — especially during a crisis. "We do what we need to do, and we often don't see the toll it takes on us," he noted. Moreover, the pressure to be at the "giving" end can lead to stigma in acknowledging vulnerability.

Ross said he hopes his story will help to destigmatize reaching out for help. "It is possible that a silver lining of this terrible crisis is to normalize physicians receiving help for mental health issues."

Marcus likewise openly shares his own experiences about struggles with burnout and depressive symptoms. "As a physician educator, I think it's important for me to be public about these things, which validates help-seeking for residents and colleagues."

For physicians seeking help not offered in their workplace, the Physician Support Line is a useful resource, added Margolis. She noted that its services are free and confidential.

Krames is proud to share this guest blog from Medscape. This article was posted on https://www.medscape.com/viewarticle/939343