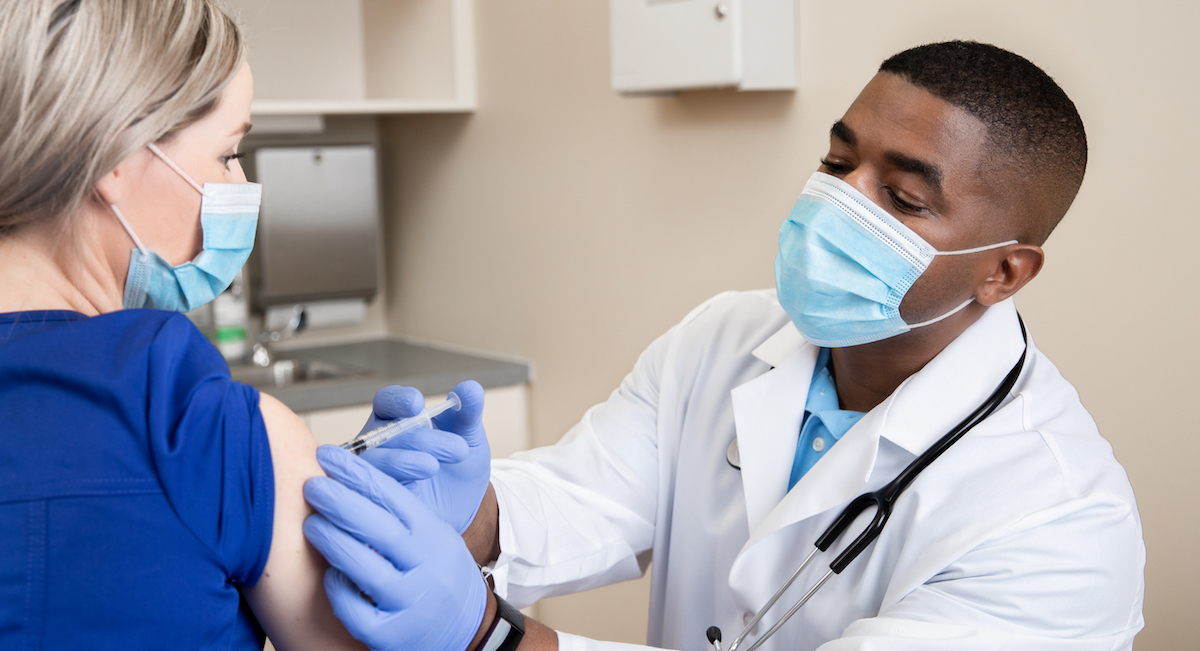 Both studies included mostly healthy adults. A diverse ethnic and racial vaccinated population was included. A reasonable number of persons aged over 65 years, and persons with stable compromising medical conditions were included. Adolescents aged 16 years and over were included. Younger adolescents have been vaccinated or such studies are in the planning or early implementation stage as 2020 came to a close.

These are new and revolutionary vaccines, although the ability to inject mRNA into animals dates back to 1990, technological advances today make it a reality.1 Traditional vaccines typically involve injection with antigens such as purified proteins or polysaccharides or inactivated/attenuated viruses. mRNA vaccines work differently. They do not contain antigens. Instead, they contain a blueprint for the antigen in the form of genetic material, mRNA. In the case of Pfizer's and Moderna's vaccines, the mRNA provides the genetic information to synthesize the spike protein that the SARS-CoV-2 virus uses to attach to and infect human cells. Each type of vaccine is packaged in proprietary lipid nanoparticles to protect the mRNA from rapid degradation, and the nanoparticles serve as an adjuvant to attract immune cells to the site of injection. (The properties of the respective lipid nanoparticle packaging may be the factor that impacts storage requirements discussed below.) When injected into muscle (myocyte), the lipid nanoparticles containing the mRNA inside are taken into muscle cells, where the cytoplasmic ribosomes detect and decode the mRNA resulting in the production of the spike protein antigen. It should be noted that the mRNA does not enter the nucleus, where the genetic information (DNA) of a cell is located, and can't be reproduced or integrated into the DNA. The antigen is exported to the myocyte cell surface where the immune system's antigen presenting cells detect the protein, ingest it, and take it to regional lymph nodes where interactions with T cells and B cells results in antibodies, T cell–mediated immunity, and generation of immune memory T cells and B cells. A particular subset of T cells – cytotoxic or killer T cells – destroy cells that have been infected by a pathogen. The SARS-CoV-2 mRNA vaccine from Pfizer was reported to induce powerful cytotoxic T-cell responses. Results for Moderna's vaccine had not been reported at the time this column was prepared, but I anticipate the same positive results.

The revolutionary aspect of mRNA vaccines is the speed at which they can be designed and produced. This is why they lead the pack among the SARS-CoV-2 vaccine candidates and why the National Institute of Allergy and Infectious Diseases provided financial, technical, and/or clinical support. Indeed, once the amino acid sequence of a protein can be determined (a relatively easy task these days) it's straightforward to synthesize mRNA in the lab – and it can be done incredibly fast. It is reported that the mRNA code for the vaccine by Moderna was made in 2 days and production development was completed in about 2 months.2

A 2007 World Health Organization report noted that infectious diseases are emerging at "the historically unprecedented rate of one per year."3 Severe acute respiratory syndrome (SARS), Zika, Ebola, and avian and swine flu are recent examples. For most vaccines against emerging diseases, the challenge is about speed: developing and manufacturing a vaccine and getting it to persons who need it as quickly as possible. The current seasonal flu vaccine takes about 6 months to develop; it takes years for most of the traditional vaccines. That's why once the infrastructure is in place, mRNA vaccines may prove to offer a big advantage as vaccines against emerging pathogens.

Early Efficacy Results Have Been Surprising

Both vaccines were reported to produce about 95% efficacy in the final analysis. That was unexpectedly high because most vaccines for respiratory illness achieve efficacy of 60%-80%, e.g., flu vaccines. However, the efficacy rate may drop as time goes by because stimulation of short-term immunity would be in the earliest reported results.

Preventing SARS-CoV-2 cases is an important aspect of a coronavirus vaccine, but preventing severe illness is especially important considering that severe cases can result in prolonged intubation/artificial ventilation, prolonged disability and death. Pfizer/BioNTech had not released any data on the breakdown of severe cases as this column was finalized. In Moderna's clinical trial, a secondary endpoint analyzed severe cases of COVID-19 and included 30 severe cases (as defined in the study protocol) in this analysis. All 30 cases occurred in the placebo group and none in the mRNA-1273–vaccinated group. In the Pfizer/BioNTech trial there were too few cases of severe illness to calculate efficacy.

Duration of immunity and need to revaccinate after initial primary vaccination are unknowns. Study of induction of B- and T-cell memory and levels of long-term protection have not been reported thus far.

Could mRNA COVID-19 Vaccines Be Dangerous in the Long Term?

These will be the first-ever mRNA vaccines brought to market for humans. In order to receive Food and Drug Administration approval, the companies had to prove there were no immediate or short-term negative adverse effects from the vaccines. The companies reported that their independent data-monitoring committees hadn't "reported any serious safety concerns." However, fairly significant local reactions at the site of injection, fever, malaise, and fatigue occur with modest frequency following vaccinations with these products, reportedly in 10%-15% of vaccinees. Overall, the immediate reaction profile appears to be more severe than what occurs following seasonal influenza vaccination. When mass inoculations with these completely new and revolutionary vaccines begins, we will know virtually nothing about their long-term side effects. The possibility of systemic inflammatory responses that could lead to autoimmune conditions, persistence of the induced immunogen expression, development of autoreactive antibodies, and toxic effects of delivery components have been raised as theoretical concerns.4-6 None of these theoretical risks have been observed to date and postmarketing phase 4 safety monitoring studies are in place from the Centers for Disease Control and Prevention and the companies that produce the vaccines. This is a risk public health authorities are willing to take because the risk to benefit calculation strongly favors taking theoretical risks, compared with clear benefits in preventing severe illnesses and death.

Pfizer/BioNTech expects to be able to produce up to 50 million vaccine doses in 2020 and up to 1.3 billion doses in 2021. Moderna expects to produce 20 million doses by the end of 2020, and 500 million to 1 billion doses in 2021. Storage requirements are inherent to the composition of the vaccines with their differing lipid nanoparticle delivery systems. Pfizer/BioNTech's BNT162b2 has to be stored and transported at –80° C, which requires specialized freezers, which most doctors' offices and pharmacies are unlikely to have on site, or dry ice containers. Once the vaccine is thawed, it can only remain in the refrigerator for 24 hours. Moderna's mRNA-1273 will be much easier to distribute. The vaccine is stable in a standard freezer at –20° C for up to 6 months, in a refrigerator for up to 30 days within that 6-month shelf life, and at room temperature for up to 12 hours.

Timelines and Testing Other Vaccines

Strong efficacy data from the two leading SARS-CoV-2 vaccines and emergency-use authorization Food and Drug Administration approval suggest the window for testing additional vaccine candidates in the United States could soon start to close. Of the more than 200 vaccines in development for SARS-CoV-2, at least 7 have a chance of gathering pivotal data before the front-runners become broadly available.

Testing diverse vaccine candidates, based on different technologies, is important for ensuring sufficient supply and could lead to products with tolerability and safety profiles that make them better suited, or more attractive, to subsets of the population. Different vaccine antigens and technologies also may yield different durations of protection, a question that will not be answered until long after the first products are on the market.

AstraZeneca enrolled about 23,000 subjects into its two phase 3 trials of AZD1222 (ChAdOx1 nCoV-19): a 40,000-subject U.S. trial and a 10,000-subject study in Brazil. AstraZeneca's AZD1222, developed with the University of Oxford (England), uses a replication defective simian adenovirus vector called ChAdOx1.AZD1222 which encodes the SARS-CoV-2 spike protein. After injection, the viral vector delivers recombinant DNA that is decoded to mRNA, followed by mRNA decoding to become a protein. A serendipitous manufacturing error for the first 3,000 doses resulted in a half dose for those subjects before the error was discovered. Full doses were given to those subjects on second injections and those subjects showed 90% efficacy. Subjects who received 2 full doses showed 62% efficacy. A vaccine cannot be licensed based on 3,000 subjects so AstraZeneca has started a new phase 3 trial involving many more subjects to receive the combination lower dose followed by the full dose.

Johnson and Johnson (J&J) started its phase 3 trial evaluating a single dose of JNJ-78436735 in September. Phase 3 data may be reported by the end of2020. In November, J&J announced it was starting a second phase 3 trial to test two doses of the candidate. J&J's JNJ-78436735 encodes the SARS-CoV-2 spike protein in an adenovirus serotype 26 (Ad26) vector, which is one of the two adenovirus vectors used in Sputnik V, the Russian vaccine reported to have 90% efficacy at an early interim analysis.

Sanofi and Novavax are both developing protein-based vaccines, a proven modality. Sanofi, in partnership with GlaxoSmithKline started a phase 1/2 clinical trial in the Fall 2020 with plans to commence a phase 3 trial in late December. Sanofi developed the protein ingredients and GlaxoSmithKline added one of their novel adjuvants. Novavax expects data from a U.K. phase 3 trial of NVX-CoV2373 in early 2021 and began a U.S. phase 3 study in late November. NVX-CoV2373 was created using Novavax' recombinant nanoparticle technology to generate antigen derived from the coronavirus spike protein and contains Novavax's patented saponin-based Matrix-M adjuvant.

After Moderna and Pfizer-BioNTech, CureVac has the next most advanced mRNA vaccine. It was planned that a phase 2b/3 trial of CVnCoV would be conducted in Europe, Latin America, Africa, and Asia. Sanofi is also developing a mRNA vaccine as a second product in addition to its protein vaccine.

Vaxxinity planned to begin phase 3 testing of UB-612, a multitope peptide–based vaccine, in Brazil by the end of 2020.

However, emergency-use authorizations for the Pfizer and Moderna vaccines could hinder trial recruitment in at least two ways. Given the gravity of the pandemic, some stakeholders believe it would be ethical to unblind ongoing trials to give subjects the opportunity to switch to a vaccine proven to be effective. Even if unblinding doesn't occur, as the two authorized vaccines start to become widely available, volunteering for clinical trials may become less attractive.

Pichichero is a specialist in pediatric infectious diseases, and director of the Research Institute at Rochester (N.Y.) General Hospital. He said he has no relevant financial disclosures. Email Pichichero at pdnews@mdedge.com.

Krames is proud to share this guest blog from Medscape. This article was posted on https://www.medscape.com/viewarticle/942654#vp_3